History of the Parish

The area known as "Rossington" is made up of a number of villages and hamlets, namely "Hesley", "Littleworth", "Rossington", "New Rossington", Rossington Bridge and Shooters Hill. Littleworth was enlarged to a great degree in the 1970s, when Littleworth Park Estate was built. The new village began to be built around the time of the sinking of the colliery. Rossington Bridge, although now only consisting of a few buildings is the oldest of the six settlements; situated on the crossing of the Roman road from Lincoln (Lindvm) to York (Ebvrscvm) via Doncaster (Danvm) it was once the site of a major Roman fort (the largest between Lincoln and York). Rossington Bridge was also an important staging post on the Great North Road.

After the colliery closed, Rossington saw the building of large levels of new, private housing, particularly around the "Old Village", raising the village's affluence. Locally, the village is known as "Old Village" and "New Village".

It was, however, in the mid-20th century that saw the largest expansion of the area. The pit was sunk between 1912 and 1915 The need for workers in and around the Rossington Main Colliery led to the building of large numbers of houses near to the pit in what was called New Rossington. After the end of British Coal in the early 1990s, the mine was able to keep operating and became one of the last in the area to keep producing coal albeit at a greatly reduced scale. However, with the decline of the mine, the village suffered high levels of unemployment and poverty throughout the 1990s and early 2000s. The colliery closed briefly between 1993 and 1994 before finally closing in 2007.

The 'Old Village' and 'New Village' are separated by the East Coast Main Line. There are only two crossing points over the railway between the old and new villages: the road bridge on Stripe Road and the level crossing where West End Lane becomes Station Road. Rossington railway station was closed for regular services in 1958 but a few special trains stopped there until the late 1960s. The station buildings and platforms remained in place until the early 1980s, when the platforms, to the south of the level crossing, were dug up, and the old signal box that stood on the north east side of the crossing was demolished. A few years earlier, the signalling had been automated, and control of the crossing had moved to Doncaster PSB. When the old signal box was in operation, the crossing was controlled by a large set of wooden gates, which were operated by the signalman who had to leave the signal box and open and close the gates by hand. By the mid 1950s, these gates were opened and closed by a large wheel in the signal box. These gates were replaced by automated barriers controlled from Doncaster PSB at the same time as the signal box was closed; however, some older residents of Rossington still refer to the crossing gates. The only surviving building is the old station cottages, which stand on the north west side of the crossing and are now private dwellings.

Rossington is twinned with McCleary in Washington State, USA. 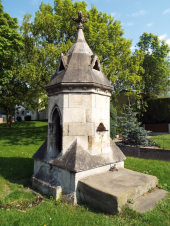 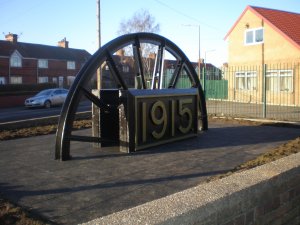